Pass Storming:
Pass Storming is a term from the 1930–40’s for riding passes with a bike in the Lake Disctrict, in the UK. Like the Tour de France this stopped and was forgotted due to the events of WW2. Does Pass Storming sound familar?

Cycling history seems to be repeating, as the modern equivilant to Pass Storming has fractured into Mountain Biking, Gravel and Bikepacking.
Pass storming, in the 1930’s was done on bicycles that were availble at the time; often a fixed gear bicycle, riding or carrying over these tough passes.

I have recently discovered the term “tracklocross”. Effectively riding a fixed gear MTB with drop bars (or Monster Cross) around a muddy field. I have been doing this for years. Every winter I am drawn back to saving cash and saving my brake pads. I discovered 63xc.com and set about making my MTB fixed to spice up my London commute via some parks. 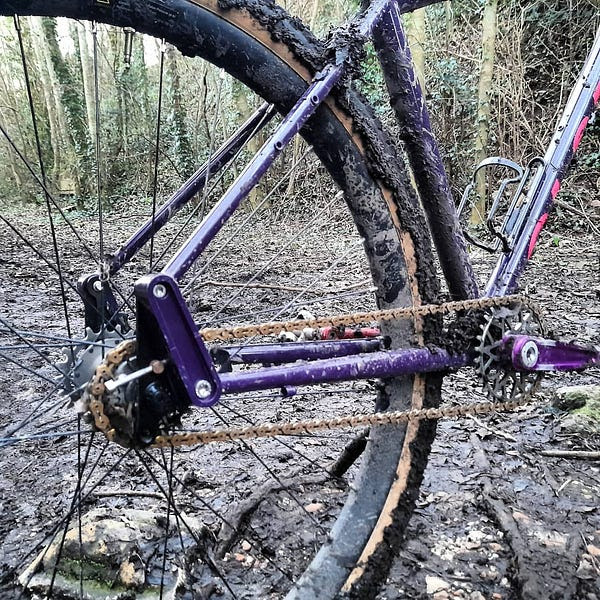 Sure there all the pitfalls of riding fixed, but there is some joy too. I suggest experimenting, find some friends and have some fun. 63xc and Sheldon Brown have some good advise on where to start and what to expect. There is some benefits with fixedgear mtb. They climb really well and you save money on not needing to replace those rear brake pads.

Find a frame that will keep the chain tension. Doofers and hangers do not work. A rear facing, sliding or swing dropout frame is ideally needed. I usually run a slicker tyre to allow for skid braking on grass and mud. I would go for a gear higher than I would usually run on my singleslpeed MTB. 32:18T becomes 32:17T for fixed. You can run a 6-bolt cog on the disc side of your standard hub. Going Fixed Disc is a bit more difficult as threaded track cogs strip in my experience.

I have been working on a 142mm Disc singlespeed hub with 6-bolt on the disc side and thread for a BMX freewheel on the drive side. This hub can be run in 4 different ways. 1: Fixed/Fixed 2:Fixed/Disc 3:Fixed/Free 4:Free/Disc. It can also be run as a front wheel on a 142mm FAT fork, but that is another story…

Pass Storming has never really gone away. It was never really given the cycling history or audience that it deserves. It is about riding bikes off-road until you need to push. It embrases a simpler type of riding, from a time when you had very little choice. Pass storming is adventure riding and it is tough on gear. Fixed or Singlespeed has been around well before derailleurs its just Pass Storming has been forgotten??